In design, we talk a lot about trends, those changes in style and the direction of our industry. But why do design trends happen, and how are they sourced and predicted? Is a trend defined by its newness, or are we at the point where everything we do is recycling a style previously used?

The idea of using the past as an inspiration for the future has long been around, but with the rise of hipsterism and the new valuation put on all that is old is good, it’s a particularly relevant discussion. Why do we now value this antique style of design, these hand lettered badges and retro tones?

Graphic design trends are how we interpret what’s happened before, to help us try and understand and predict the future. The idea is that we want something different than we have now, but not too different. A gradual change from what was to what will be. And what we have now will soon be what was in the past, ready for re-analysis and adoption at a later point. In the end, design is cyclical—continuously pulling from the past.

99er Steve Hai embraces the Steampunk Trend, displaying antique elements in a more contemporary style, in his design for the Monniker contest — keywords selected by the client

When we talk about trend prediction as a harkening back to the past, we have a whole series of vocabulary to describe what we mean. Often, we find that people define these words differently. But on the whole, here’s what they mean:

While we think of the trends changing our designs now as something contemporary, they have all been used in concept in the past. Most often it was in other forms of art, and design as one of the newer genres, is sampling from the experimentation gone through the older ones — like painting.

Flat design has made itself visible for thousands of years. The first designs to happen didn’t have the nuances of the realists. The most famous example, the ancient Egyptians, created designs of limited color palettes and a high degree of symbolism to. A complex visible language. Similarly, the flat design of today’s UX has established sets of symbols commonly understood to represent certain actions. Taking a cue from ancient simplicity, a simplified style of design helps users adapt to the changing medium.

Still Life in Violin and Music, by William Michael Harnett in 1888 (via Wikipedia); Apple’s iBook Design (via Fast.Co)

This is not the first time in history that designers or artists have strived to make a 2D object look 3D. A great example is the Trompe-l’œil technique, originating in the 17th century Baroque period. The term is French for “deceive the eye,” and the goal is to use paint to create the illusion of an additional dimension, using perspective, color and texture. Just like Skeumorphism.

Scan from an old National Geographic (via Permanent-Weekend), and Instagram screenshot

Film photography had long gone the way of the photo-fantatics by the time Instagram came around. But the company found success playing off of the crazy color queues of cult-classic films like Kodak’s Kodachrome, no longer in production. The fading, the light leaks, the off-kilter colors, they’re all derived from decades of film use, harkening back to the days when the results of our photos were much less realistic or expected. 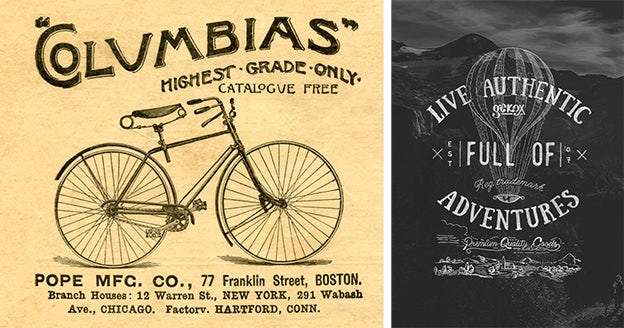 Some of the first graphic design the world ever saw was in the form of hand-lettered advertisements. Complex, text-based concepts plastered to window fronts, displayed in newspapers. And today we’re embracing that same thing. The focus on type and an imperfect take on a classic font, even the layered layouts of hand-sketched imagery is all taken from an original template.

This colorful design by Ace_Saiah responds to the terms “retro” and “vintage” for Jet Pack Movers, referring back to the 1950s style with a mascot and layout.

So in the end, what is a trend? And how do we know the different between that and a fad… that and a revolution… that and a disruption of the design industry? James Woudhuysen, Professor of Innovation and Forecasting at De Montfort University, says a trend is:

“usually deep-seated and the confluence of a number of factors including technology, economics, politics, and demography”

It’s an amorphous thing, impossible to really understand. The key to knowing what’s coming up, or becoming a trend-leader yourself is to pay attention. To the past, to the disruptions of new technology, to what others are doing around you, both good and bad. As a designer, you’ve got to find ways that you can react to current conventions, finding your own spin to them, and making them yours.

What do you think lies in store for the future of design trends? Show us in the comments!