Okay, we admit it. We have an office crush. Yep, we’re in love with our new office mural.

In late November 2013, the 99designs team in Melbourne moved to a brand-spanking new office in the inner-city suburb of Richmond. With a large open-plan space, it’s housed in a converted four-story warehouse building that can easily fit in 70 employees — perfect for a growing team. And check out the view… 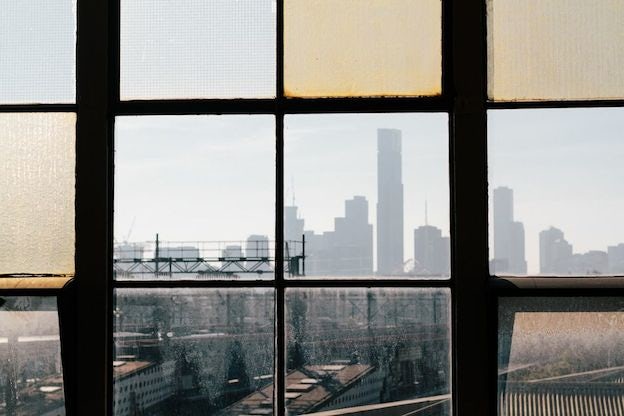 Our interior has an impressive view as well. It’s inspired by the 99designs community, and several walls are decorated with a mosaic-style arrangement of winning designs from various contests. But the star attraction of the space is the large Melbourne city landscape mural adorning the boardroom.

We launched a design contest for this mural in mid-November and more than 80 designers participated (check out the great runners-up here!). 99designs’ San Francisco office features an awesome cityscape, so it wasn’t hard to decide that the Melbourne boardroom should be given the same treatment. After three weeks of energetically searching for the perfect proposal, we found nosoh, also known as Ashley Nolan. Lucky for us he’s a local designer and was able to finish the mural in our office just in time to receive an overwhelming amount of “oohs” and “aahs” during our launch party. Here it is!

Ashley, who is often referred to as simply Ash, came in to the Melbourne 99designs office in early December to scope out the walls he’d be working on. Prior to coming in, Ash thought he’d be creating a mural for a company that likes 99designs, not 99designs itself! Yes Ash, it’s really us, and it was a pleasure to meet you. And thanks for sitting down with us to answer the questions below.

– Tell us a little bit about yourself and your work. I’m just a guy who likes to draw and paint pictures. If other people like it then that’s even better!

– How did you come about joining 99designs? I first heard of the platform through a website that was actually holding a 99designs contest for a splash page. I joined up for fun — which it is!

– Was this your first experience coming in to paint your design as a mural? In my youth I often enjoyed painting outside using spray cans, brushes and rollers. So these sorts of projects were more or less just a natural progression. Of course, each project is different, and each has logistical problems that need to be anticipated. My first few big projects were outside and I quickly learned that strong winds, searing sun, and sudden storms can really test you! I’ve done several large scale works, even larger than this one. But this was definitely the most enjoyable!

– Sounds like you’ve been inspired by street art a lot? I have always found inspiration in anything, anywhere, and at any time. I heard something once about design not just being a job but a way of life. Which to me, rings true. For as long as I can remember I have always tried to be aware of my surroundings; to keep my eyes open and to take in as much visual information as I can.

Funnily enough, the area of 99designs’ new office used to be a real hot-spot for graffiti, and some awesome Australian and international artists used to put up stuff on the wall down here. As part of my frequent visits to Melbourne documenting the most active graffiti hot spots, the outside wall of this building was one of the first of many I visited.

That said, it also really was an honor to finally be able to paint inside this building.

– While we’re talking about you coming in to paint, what did you think of our new office? Your new office is stunning. The views are breathtaking. But most of all, I think the staff is what really makes the working environment what it is. The 99designs team — here and abroad — is full of lovely, talented people and it was a pleasure to meet them. 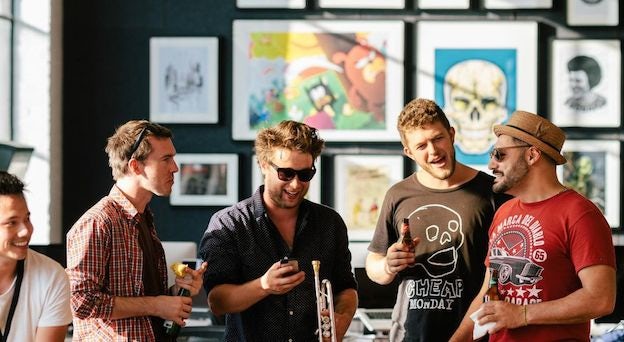 – Can you name a piece of art for you that has influenced you? Ah, that’s a really tough question! I remember seeing Escher’s lithograph Hand with Reflecting Sphere when I was in primary school. It’s such a powerful yet whimsical image. Artists such as Arthur Streeton, Jeffrey Smart and Monet inspire me, but also any animation, illustration, and design that I come across inspires my work.

– What do you do with your work aside from showing it at 99designs? Lately I’ve been working on a collection of vintage motorcycle racing-inspired paintings in oil that are really meant to be a study — and even celebration — of man and machine. I’m not even sure why I started the project, but it’s definitely something that continuously inspires me.

– What do you love most about Melbourne? The architecture, art, fashion, food and sport.

– Do you have any advice for those aspiring to be an illustrator? Don’t do it! Haha, just kidding. My advice is just to work as hard as you can — see and learn as much as you can, and have as much fun as you can while you’re doing it. There is no point in taking yourself too seriously. I think it was Dali who said something like, ”Have no fear of perfection, you’ll never reach it.”

We’d like to give a big thanks to Ash and all designers who entered our contest!